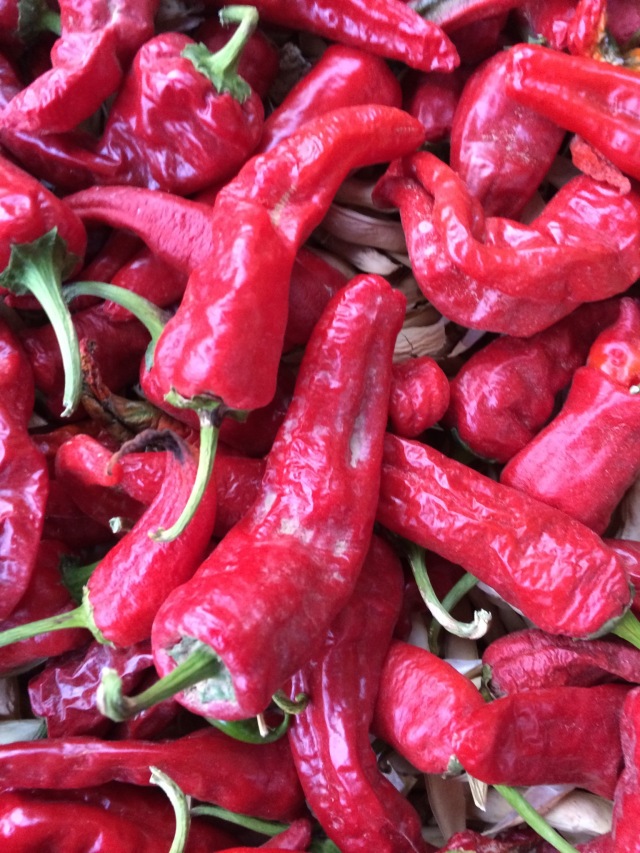 Today we gathered at Parr Field to harvest our fruit crops that could be damaged if they are subjected to frost, which could happen any night now…  Above you can see a picture of our red chile that is spread out to dry but we also harvested a bunch of green chile to roast and freeze.  This is chile we have been breeding for the region, it seems to be doing better and better each year.

We also had to bring in our squash to avert any potential of frost damage.  We had a meager harvest of squash this year compared to last year.  Last year we brought in over 400 pounds of squash!  This year we will be lucky to have about 30 pounds.  What was the difference between last year and this year?  There were many, but our predictions point to the fact that we likely watered about half as much this year than last year.  We had some problems with the irrigation system that did not allow us to irrigate in the way we would have liked.  We also suffered more squash bug damage this year than last year.

It seems that when dealing with squash bugs, you have to be more vigilant as the years go on if you are planting squash in the same area.  I believe this is because future generations of squash bugs are able to persist in soils and garden areas that continue to have squash growing, year after year.  This is a good argument for crop rotation, fallowing, and utilizing diversity in your garden to limit the influence of insect damage.

Nevertheless, we have enough squash to run our processing workshops and to have seed.  Looking at the “glass half-full,” it can be said that the squash that survived limited irrigation and the influence of the squash bugs will be stronger than the average seed that we obtained last year that did not have to weather such pressures.

Miguel Santistevan is a researcher, educator, and advocate for traditional agriculture crops and systems.
View all posts by Miguel →
This entry was posted in AIRE, Parr Field. Bookmark the permalink.