Reflections on the 2016 Growing Season

August 8, 2016. Our plot of blue corn will likely be productive this year.

The growing season always begins with watchful hopes of snowpack in the mountains. Many snowfalls that are measured in inches in the Taos Valley are matched with snowfalls that are measured in feet in the high mountains. The last post shows some enthusiasm and anticipation of a good, wet winter. Several elders of the acequia community have shared with me that the early snows of the winter will feed our irrigation needs (acequias) while late snows mostly contribute to downstream river flows in the Rio Grande. Our biggest snowfall was as in the post in November and gave much hope for a robust acequia irrigation season. We also got some snow in December and January. As most of the growing season has now passed, we are overdue to tell some of the stories and observations this year.

March 6, 2016. This plot was recently planted with one row of peas and fava beans using a digging fork and hoe. The rest of the plot contains garlic.

This winter was interesting in that there seemed to be more water in the river than in many years past. Besides the aforementioned snowfalls, there was not too much precipitation to speak of. I remember seeing water flowing in February from ice that persisted from months before. It seemed to warm up earlier in the year than in years past. This warm spell allowed us to finally put the garlic in the ground in late February, four months late but better late than never. In early March we planted fava beans and peas. In less than one month from planting, the garlic emerged.

April 4, 2016. First acequia irrigation with no shortage of flow.

In the beginning of April we had the acequia irrigation flowing again. We have a mostly new Commission and Mayordomo this time around and the transition was smooth. We planted potatoes on May 8 and planted the plot of blue corn with the help of students from the Denver Montessori School on May 25.  Irrigation was consistent until the first week in July, at which time the river flows were diminished and did not allow the water to reach my fields from the acequia. The rains were minimal and my corn and other crops began to suffer water stress so I installed drip irrigation in mid-July. I usually just cultivate the soil and let my maize persist, losing some to drought, but this year I decided to provide extra water and insure a better harvest.  This additional water is especially important to crops like squash, cucumbers, and melons.

May 8. 2016. Soil prepared with 8hp rototiller and planted with potatoes.

We are now in August and are in the middle of harvest activity. We had some good fruit production this year with some pie cherries in early July and apricots in the middle of July. We also harvested our garlic at this time. The garlic was smaller than last year, maybe due to less water, heat, soil fertility, and/or our late planting date. We are gearing up for some peaches and apples now by mid August. The chokecherries are also ready. We have some more dry fava beans and peas to harvest, which have been drying on the plants for a few weeks now. The corn is forming ears; it will be about a month to harvest. We are going to start harvesting young squash in about a week or two and we have a couple of squash that we will allow to mature for seed and pumpkin flesh. Our biggest squash is about as big as a softball right now. 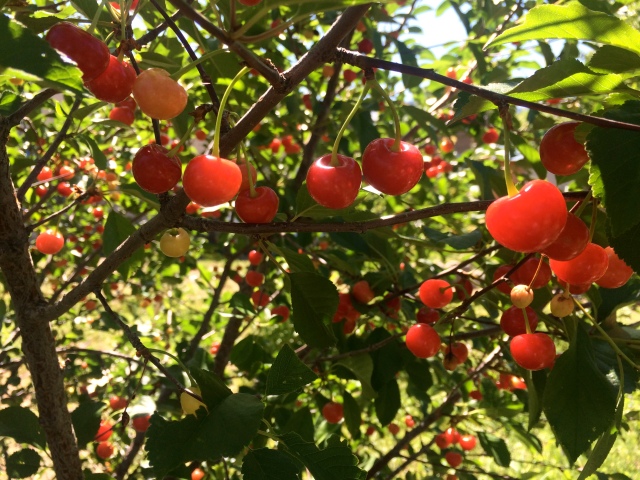 July 4, 2016. Cherries await harvesting and are the first fruit of the season.

I look to changes in my growing season experience year-to-year to try and observe and predict the potential effects of climate change on our region, especially with regard to the resilience of agriculture. We are always looking at how the season progresses and how the experience might give us clues as to what is in store for us in the future. A few of things we noticed this year is that our hollyhocks never really flowered this year. We had a couple of heat waves and some dry periods but I am not sure if that was the cause of the problem. We also had a plague of grasshoppers that did some damage to many plants. In general we notice an intensity of heat that goes beyond temperature. Perhaps it is UV radiation or increased CO2, but there seems to be an aspect to the heat that is more intense than in years past. We feel the best way to meet the challenge of climate change is to keep adapting our crops and keep building our soils while looking for innovative ways to capture water and enhance soil moisture through composting, biochar, and other water-harvesting techniques. We look forward to keeping you posted on these and other developments in the future, until next time!

July 28, 2016. A plot of “melon mexicano,” cucumbers, and chile in the foreground is supported by drip irrigation after the acequia irrigation season ends. Our plot of blue corn stands in the background.

2 Responses to Reflections on the 2016 Growing Season