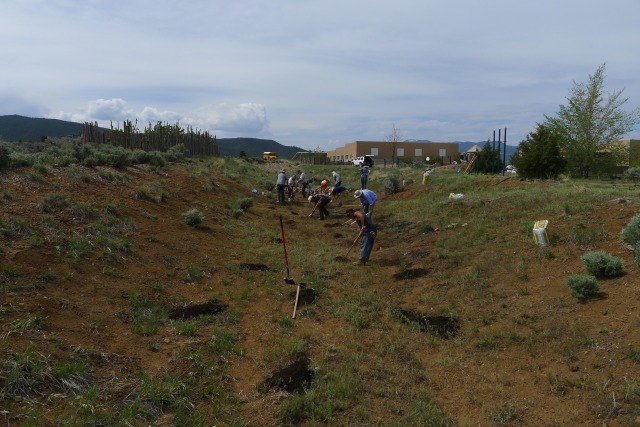 On Saturday, May 6, about 12 people came to learn about possibilities in dryland agriculture and help implement a ‘three-sisters’ garden in the arroyo next to the Taos Charter School.  This workshop and garden was the second in a series that included the tree pruning workshop on March 20, the post that can be read here.  The workshops and this garden were funded by a grant from Los Jardineros de Taos, a local gardening club that supports projects like these in the area.  The workshop would not have been possible without the support and enthusiasm of Principal Jeremy Jones of the Charter School, so we extend our thanks to him and the staff of the school as well.  The Taos Charter School serves grades K-8 so we are happy to be able to enrich the grounds and the experience of the students…

The idea behind this kind of agricultural style is that there is enough residual moisture in an arroyo along with rain (and maybe flood) events that will be sufficient to grow and harvest a crop.  There are large check dams of rocks to slow down the flow of flood waters if that should occur, we hope.  The mounds are planted with three seeds each of corn and beans and every third mound contains a squash.  In the traditional three sisters gardens I have studied, corn and beans are in every mound and squash, since it can vine out and cover large areas, is planted in every third or fourth mound.  The crops are mutually supportive with corn needing nitrogen and providing structure, beans providing nitrogen and climbing the corn, and squash shading the ground for moisture retention, soil cooling, and weed suppression.  This can be considered the ultimate form of companion planting or what is called a ‘guild’ in Permaculture.

Edward Gonzales exhibits strength and proficiency in all aspects of northern New Mexico culture from raising crops and livestock to adobe construction and other skills.

This workshop was assisted by Edward Gonzales, a lifelong northern New Mexican who has spent his life living from the land.  Edward was representing NIFI, the National Immigrant Farmer Initiative.  He gave a presentation on his life experience farming al temporal, or the traditional dryland or secano agricultural traditions that are connected to acequia culture.  He spoke of how his mom raised him and 7 siblings with farming, plant gathering, and other land-based traditions.  He talked about raising acres of crops in this dryland strategy in the highlands near the mountains of beans, fava beans, peas, barley, wheat, and corn.  His mom, the late Donne Gonzales, was a traditional yerbera (herbalist) and partera (midwife).  Her knowledge was featured in !Que Vivan las Acequias! radio program # 88 and can be heard here.  I have known this family for almost 20 years and am always impressed by the depth of their knowledge and tradition.

We also received a presentation from 6th grade student Mariel who also received a grant from Los Jardineros to install a butterfly or pollinator garden at the school.  We partnered on this workshop to incorporate some of her goals into our three sisters garden.  We prepared a bed within the garden to put in some plants for the pollinators, namely milkweed and cota.  We will also assist Mariel with the construction of a raised bed that will be put near the entrance of the school that will have more plants and flowers for the pollinators.

It was a great day with great company, conversation, and good work.  We look forward to sharing the results of this garden planting with you all, hopefully showing that agriculture is possible in a dryland context in areas that might not have been considered suitable for agriculture.  As a local northern New Mexican who has studied and practiced traditional agriculture of the region, I know that this kind of agriculture has been successful for many centuries by Native American and acequia farmers alike and offers lessons for food security and resilience in the face of Climate Change…